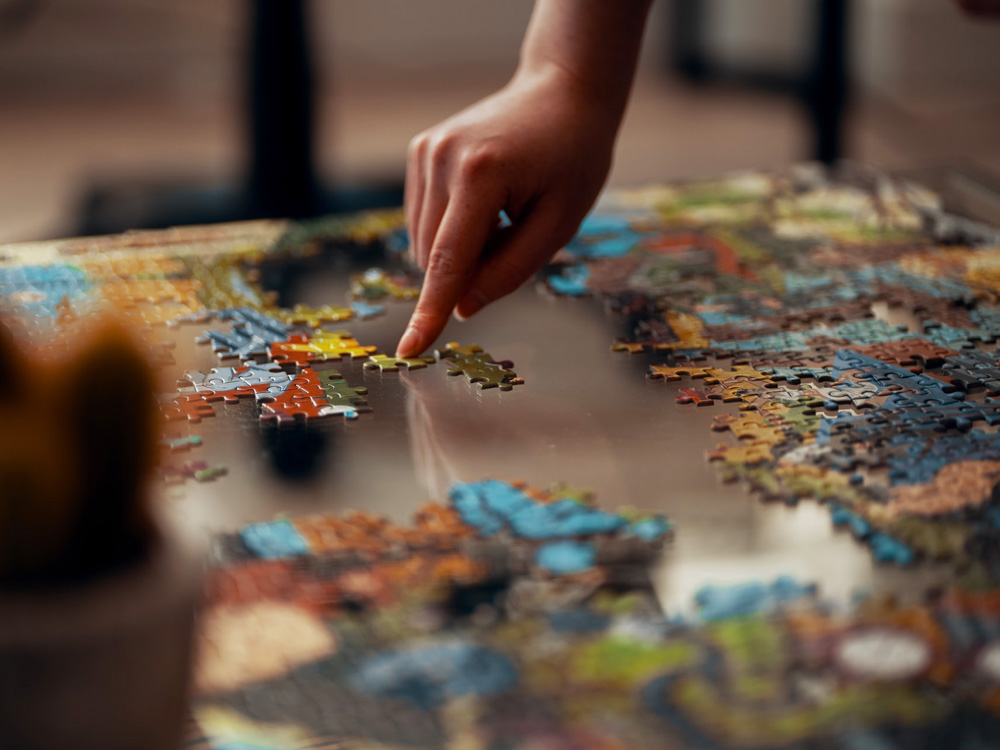 We puzzle nerds know that there’s nothing quite like spending a night (or two) at home with a new or favourite jigsaw. One of the great things about puzzling is that it’s a great solo activity – no friends required for you to have a good time. But if you’ve ever wanted to share your passion with some like-minded people, take a look at these puzzling events. From competitions to festivals and talks, there’s fun for puzzlers of any level.

The Isle of Wight Jigsaw Festival started in 1995 when Rev. Stuart Cleaver, a jigsaw puzzle enthusiast, began displaying his own private collection of jigsaw puzzles at the church. Then, to add a fundraising element, other completed puzzles went on display and on sale! It was a success with over 80 puzzles purchased, and has become an annual event that just keeps growing.

These days, the whole church is designated for displaying these puzzles, which are completed throughout the year by volunteers from across the island and the mainland.

There are puzzles of all sorts – from collectors’ items to children’s puzzles; from traditional country scenes to the latest 3D, double-sided, murder mystery, crossword, and impossipuzzles! At any one time the set-up can hold around 300 jigsaw puzzles, but as soon as one is sold, another replaces it. Which means you’ll need to visit more than once!

Hope for Three is a non-profit autism advocacy group out of Sugarland, Texas. The organization provides resources and support to families living with autism spectrum disorder. One of their biggest hosted events is their annual Jigsaw Puzzle Competition.

Teams of four have two hours to put together a 500-piece puzzle for the chance to win the title and bragging rights. The proceeds from the event go towards helping local children with autism to gain access to valuable resources, therapies, and support they might otherwise go without.

Each year, on the last weekend of September, jigsaw puzzlers descend upon Valladolid, Spain for the jigsaw puzzle World Championship, hosted by the World Jigsaw Puzzle Federation. The event recognizes the fastest jigsaw puzzlers in the world across three categories; Teams, Pairs, and Individuals.

Those competing for the Individual awards have two hours to complete a 500-piece puzzle. The Pairs competing have 90 minutes to complete an ‘unpublished’ 500-piece puzzle. In the Team category, groups of four have eight hours to simultaneously complete jigsaw puzzles of 1000, 1000, 1500, and 2000 pieces. The top three in each category receive an Official WJPC Trophy, 2,500 euros, and the right to say you’re a world class puzzler!

The 24 Hours of Puzzle event is an annual puzzling competition going back over 30 years! The individual competition determines who can complete a 500-piece puzzle the fastest. While, in the title event, competing teams race to finish as many 1000-piece puzzles as they can in 24 hours. In 2017, there were 124 teams and the fastest completed over 17,000 pieces in the 24-hour time limit. It may sound hectic, but the atmosphere is more friendly than you may think.

Aside from the actual competition, the event features face painting, a toy library area for children, a bar-restaurant, and various shows and concerts. And, the proceeds go towards two local charities!

The annual North Dakota Jigsaw Puzzle Championship takes place in Fargo, North Dakota. In its inaugural year, it was a massive success before it even started! This new event for local puzzlers was originally planned for 20 teams and had to turn competitors away when registration met a huge influx of excited puzzlers!

The event now consists of individuals and teams that compete against one another to put together a 500-piece puzzle in under three hours. The top three finishers receive a trophy and prizes from local sponsors.

The annual Newmarket Jigsaw Festival features hundreds of jigsaw puzzles for sale, all beautifully displayed around St Mary’s Church in Newmarket, Suffolk. In its third year, the festival added the British Jigsaw Championship.

In the British Jigsaw Championship, competitors from across the world race to be the first to finish a 1000-piece puzzle. Entrants are sorted into three categories: Elite (those who would expect to complete in under three hours), Pairs and Fun. Winners in each category earn a small cash prize but take home the honour of being one of the best puzzlers in Britain!

When the temperature drops, it’s the perfect time to be indoors with a good puzzle. The organisers of the St Paul Winter Carnival (which has been running since 1886!) obviously felt the same way when they decided to add a puzzle contest to their annual line-up.

Considered the largest jigsaw puzzle competition in the country, the event sees teams of four people race to complete a 500-piece puzzle in the shortest amount of time, with an overall time limit of 2 hours. The competition jigsaw is one that is made especially for the event, with teams able to keep the limited-edition puzzle regardless of where they rank.

If you want to take a less competitive approach to the world of puzzling, then the biennial Puzzle Parley could be the event you’ve been waiting for. The event started as a casual one-day gathering back in 1994 as a way for puzzle cutters to get together and discuss their craft.

Puzzle Parley has now grown into a full weekend affair, with a wide range of events for lovers of wooden puzzles. There’s a puzzle exchange for unique puzzles, puzzle crafting workshops, and presentations on everything from puzzle history to puzzle collecting and rare wooden puzzles.

From festivals to competitions, jigsaws are celebrated at events all over the world. If you’re travelling near one of these events, make sure to drop in as a spectator or participate in the action! And don’t forget to share your pics with us using #CloudberriesOfficial!