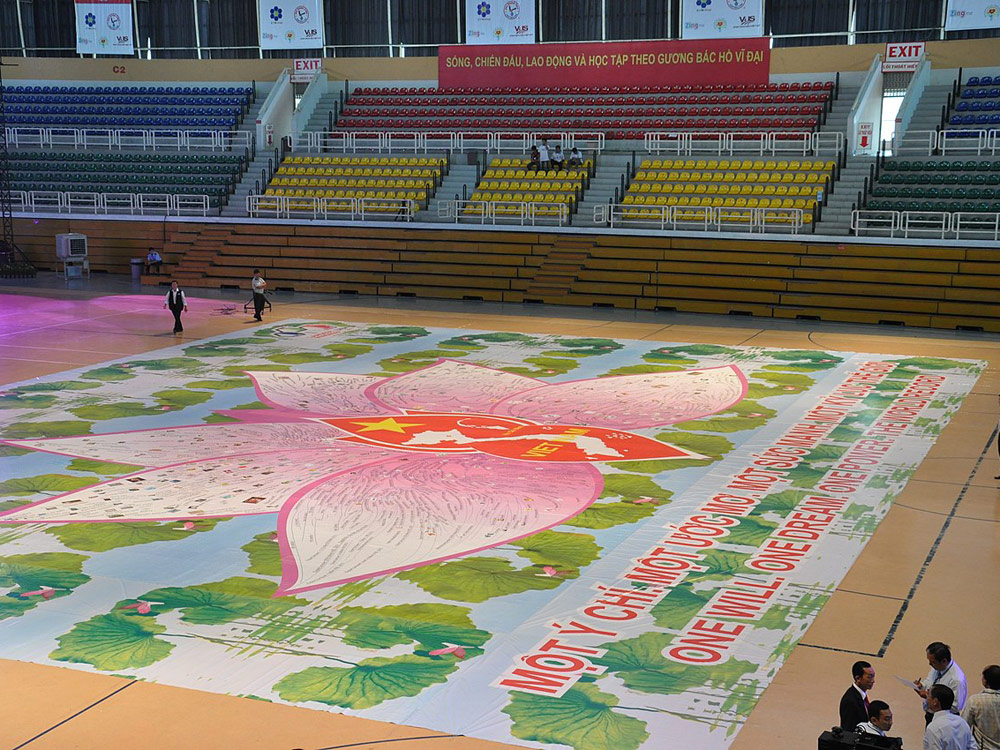 We all love a good jigsaw, but some of the planet’s biggest puzzle nerds have taken this hobby to a whole new level. Guinness World Records has recognized lots of amazing feats in puzzling, like solving puzzles at lightning speed, maintaining the biggest collection or gathering a massive crew of puzzlers to solve one together. We can’t help but admire these puzzle fanatics for leaving nothing on the table and reaching their puzzling goals!

Puzzles can be a great slow-paced, relaxing hobby, but there’s also a sense of achievement in solving puzzles at lightning speed. Connecticut teen Deepika Ravichandran showed off her record-breaking puzzle skills on June 9, 2014 by solving a 250-piece puzzle in just 13 minutes and 7 seconds. Putting it together at a rate of 18 pieces per minute, she solved the official Guinness World Record puzzle, which was completely new to her.

To make things even more challenging, the puzzle was oval shaped and had no picture on it to help guide her to the solution. As someone who solves at least one 500-piece puzzle a day, this challenge was no match for her. Ravichandran won her record at the University High School of Science and Engineering in Hartford, Connecticut as part of a charity event for her school’s UNICEF club, where they sought to raise funds to feed 250 children in need.

Before Ravichandran’s swift record, Joellen Beifuss held the record for the fastest 500-piece puzzle, which she set at the US National Jigsaw Puzzle Championships 1984 in Ohio. She solved a 500-piece puzzle she’d never seen before in just 54 minutes and 10 seconds. If that sounds a lot longer than Ravichandran’s record, keep in mind that doubling the number of pieces in a puzzle actually quadruples the amount of time it’ll take to solve.

Jigsaw puzzle with most pieces

Solving puzzles and setting records is no big deal for students at Vietnam’s University of Economics Ho Chi Minh City. They assembled a 551,232-piece puzzle on September 24, 2011, scoring the record for the most pieces in a finished jigsaw puzzle. This massive puzzle, depicting a lotus flower, measured 14.85 x 23.2 metres once completed.

The six leaves on the lotus represent six areas of knowledge: human beings, geography, history, culture, education, and economy. It took 1,600 students 17 hours to put this big picture together. The students secured their victory with more than double the number of puzzle pieces used in the previous record. That record was set in 2002 in Singapore with a measly 212,323-piece puzzle.

When it comes to creatively celebrating a major event, we think there’s no better way to do it than with one of the world’s biggest jigsaw puzzles. That’s exactly what government entity DMCC did to commemorate the Year of Zayed, honouring the late Sheikh Zayed, founding father of the United Arab Emirates. All 12,320 pieces of this 6,122.68 square metre puzzle featuring the Year of Zayed logo were assembled on July 7, 2018 in Dubai.

Wondering what happened to all those wood block puzzle pieces once the celebration was over? Honouring their commitment to sustainability, DMCC made sure that the pieces were all recycled when it was time to disassemble the puzzle. Before Dubai flipped the competition, Great East Asia Surveyors & Consultants Co. Ltd had held the record since 2002. Their puzzle measured 5,428.8 square metres and was assembled at the former Kai Tak airport in Hong Kong.

Solving a puzzle on land can be challenging enough, but with another world record for their country at their fingertips, the Dubai Police decided to take this hobby underwater. On December 2, 2013, this team of aquatic puzzlers solved a 168 square metre puzzle, winning one of the weirder accolades in Dubai’s collection of world records.

We consider ourselves to be puzzle fanatics, but it’s possible that Luiza Figueiredo of Sao Paulo, Brazil has us beat. Her collection of 1,047 jigsaw puzzles won her a Guinness World Record on July 9, 2017. This wasn’t her first record, however. She started collecting puzzles in 1967 and won her first record in 2010 with just 238 puzzles at the time. She continued to piece together her collection and broke her own record in 2012 with 502 puzzles.

Later that year though, she finally lost her position when Georgina Gil-Lacuna of the Philippines surpassed her with a collection of 1,028 puzzles. Putting her mind to winning the title back, Figueiredo more than doubled the size of her collection and officially edged out the competition to reclaim the title five years later.

Puzzle pieces come in all shapes and sizes, and in Greece puzzle pieces can even be formed by people. On March 29, 2019, the Association for the Protection of Persons with Autism-Pervasive Developmental Disorders sorted a group of 1,702 individuals into one big human puzzle piece. The image of a puzzle piece has long been a symbol of autism awareness, which shaped this world record into a great opportunity to raise awareness about Autism Spectrum Disorder.

How much is your favourite puzzle worth to you? On September 28, 2005, the most expensive jigsaw puzzle was sold at a charity auction for $27,000. The 467-piece puzzle was handmade by Rachel Page Elliott, who is known for her fine attention to detail, often cutting intricate animals and other interesting shapes into her puzzle designs. The puzzle sale was part of a charity auction in Gettysburg, PA, to benefit the Golden Retriever Foundation and it included a signed print of a golden retriever with her puppies.

Solving a puzzle is a great group activity, but some puzzles take an extra-large group of people to solve. That was the case in Barcelona, Spain, when 9,569 puzzlers got together to assemble a single puzzle of a giant panda. Chello Multicanal, a Spanish television company, put this group together at the Fira de Barcelona, a major trade show centre. Even with such a large group, it took nine days to complete the puzzle, with the team working on it from December 27, 2011 to January 4, 2012.

Most jigsaw puzzle pieces tattooed on the body

For many of us, puzzles hold a special piece of our hearts, and we all show our love of puzzles in different ways. For the performer who calls himself The Enigma, the best way to show that love was to tattoo it on his body. Never that interested in fitting in, he began covering himself with tattoos in 1992 and was officially recognized by Guinness World Records on April 13, 2011 for his full-body jigsaw puzzle tattoo that includes 2,123 individual puzzle pieces.

Try breaking your own world record with one of these puzzles!